“Just back from my third trip with the Tourmalet box and I have been very, very impressed with it. These guys have really thought about the details.
Packing the bike is so much easier. Once the wheels are off you fix the frame into the case and then you can work on the bars and saddle using it as a kind of bike stand. No more working about scratching the frame as it lies on the floor. And the because the bike is loaded vertically you don’t need a football field to lay everything out. It will all fit in the smallest spaces
Same is true about putting it in the car, on the transfer bus or in a standard mini-cab or taxi. The overall dimensions are just that bit smaller which makes fitting it in a doddle. It also rolls better than any other box I’ve used. You can even sit on it while waiting at check-in! Although I doubt that was part of the design brief.
Everyone who sees it is impressed fellow cyclists, taxi drivers and even more so when I come to pack and unpack. There is something a bit ‘on-tour’ about the look that the big plastic boxes don’t have.
There is also enough room in there to put in things like helmet and shoes along with soft bags of clothes and liquid toiletries. Meaning that I’ve had a weeks holiday using the Tourmalet and hand baggage only. The box has been on both budget and scheduled flights and with a bit of imagination I managed to get under the 23kg scheduled flight limit with a single on-board bag meaning no extra baggage charge on Lufthansa. The 32kg budget airline limit is a doddle.
The box has picked up a few bumps and scars in it’s travels but as a friend said on my last trip ‘it actually makes it look even better’.
Customer service from Buxumbox is also excellent. Box was made to order and delivered exactly when promised less than two weeks later.
In the unlikely event I ever need to buy another bike box, it would be another one of these.
If I was going to change anything my only comment would be that the reinforcing discs in the wheel bags should be made from hard polypropylene or similar as this would avoid the need for those press in axle protectors which just add a little more size. I forgot them one time and the end of the axle made a deep outward dent in one of the side panels.”
Thank you for your feedback Colin. Your final point is noted – we’ll look in to options to reinforce wheelbags…
Ed
buxumbox.com 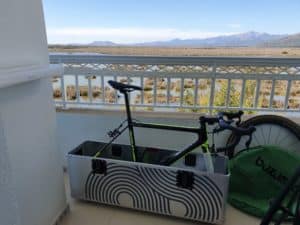 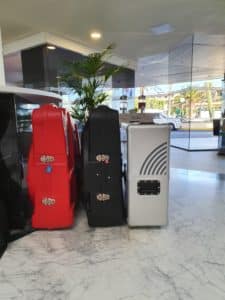 Open in WhatsApp
1
💬 Need help?
Hello 👋
How can we help you?